David Simon Cowell has already eulogized the mythical Rolling Stone in this space, and it’s not news to announce that the magazine has long since outlived its relevance and usefulness, but in the wake of another five-star review to an aging rocker (not that I think they’re too far off), it’s time to examine the five-star rating a little more closely.

Five-star ratings have long been Rolling Stone’s ultimate prize: a rarely given honor reserved for the greatest achievements in recorded popular music. 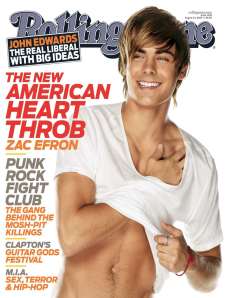 In the last couple decades, Rolling Stone has faced widespread mockery for giving five-star reviews almost exclusively to aging artists from the ’60s. This makes sense, as Rolling Stone is the voice of Baby Boomers everywhere, and Baby Boomers love nothing more than celebrating themselves. As long as Jann Wenner remains both undead and the publisher of the magazine, that’s not going to change.

The central narrative of Rolling Stone is the story of how a select group of artists, led by The Beatles and Bob Dylan, shaped rock and roll as we know it today. You know the mythology: Elvis bridged country and R&B, Buddy Holly added songwriting craft, The Beatles appeared on Ed Sullivan, Bob Dylan made lyrics matter, Pet Sounds and Sgt. Pepper’s were the soundtrack of the hippies, and so on through the decades. Some of it’s true, some of it isn’t, but it’s the accepted history of the last 50 years as told by old white guys.

And because musicians like the Beatles, Rolling Stones, Eric Clapton, and the rest of ’60s rock royalty have been lionized for so long in its pages, Rolling Stone is unable to let them go or admit that they’re no longer great. That’s why albums like Bruce Springsteen’s lyrically weak Working on a Dream and Mick Jagger’s generic Goddess in the Doorway keep getting five stars. (Well, plus Wenner probably owes Jagger some favors for whores and drugs delivered).

Do you know how many albums released during the 1960s received five-star reviews? 46. The 1970s saw even more.

Do you know how many albums released during the 1990s received five-star reviews? Three: Automatic for the People, Slanted and Enchanted, and Metallica (The Black Album). That’s it.

No Nirvana. No Achtung Baby. No Pearl Jam. No Teenage Fanclub. No Radiohead. No Beastie Boys.

That disparity between the Summer of Love years and the Generation X years tells you everything you need to know about Rolling Stone’s ethos. In the 2000s, Wenner and crew grew a bit more generous with their five-star reviews, but they gave them mostly to subpar albums from artists who were 20 years or more beyond their creative peak. U2/No Line on the Horizon, Bob Dylan/Modern Times, Brian Wilson/Smile, and the aforementioned Springsteen and Jagger efforts all received the seal of approval.

To remind you that they’re a progressive, open-minded bunch, Rolling Stone will occasionally grant five stars to Kanye West or NWA, but hip hop is essentially a forgotten form. Five star territory is almost exclusively the domain of aging white dudes who play guitar, bass and drums. I mean, I’m one of the biggest Bruce Springsteen appreciators alive, and even I’ll admit that this is just ridiculous.

I wonder what the next five-star album will be, according to Rolling Stone? Oh wait, I already know…

Filed under Music Has AIDS, The Dilemma

2 responses to “Rolling Stone’s Five-Star Reviews: A Lesson in Laziness”